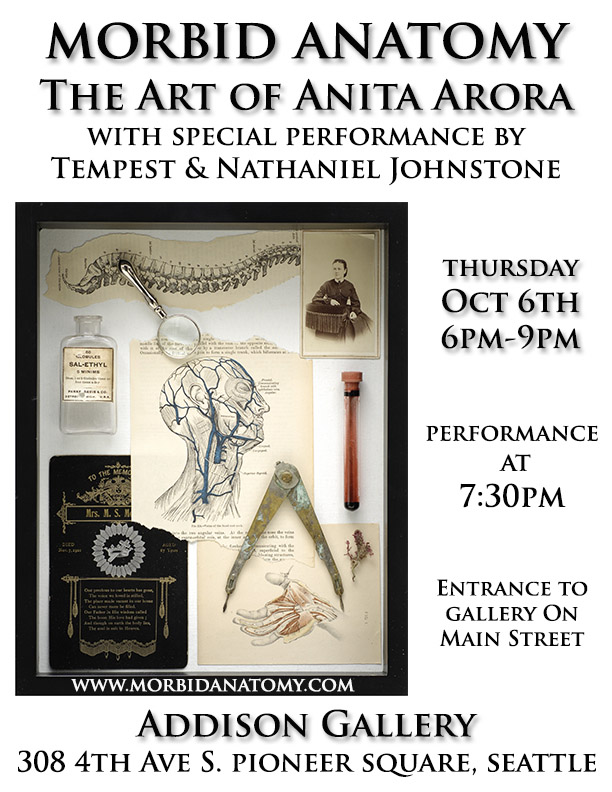 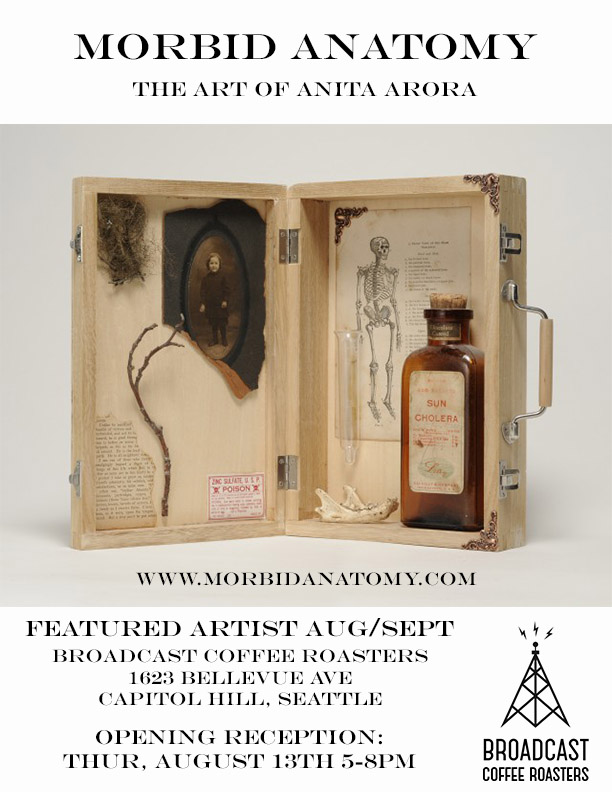 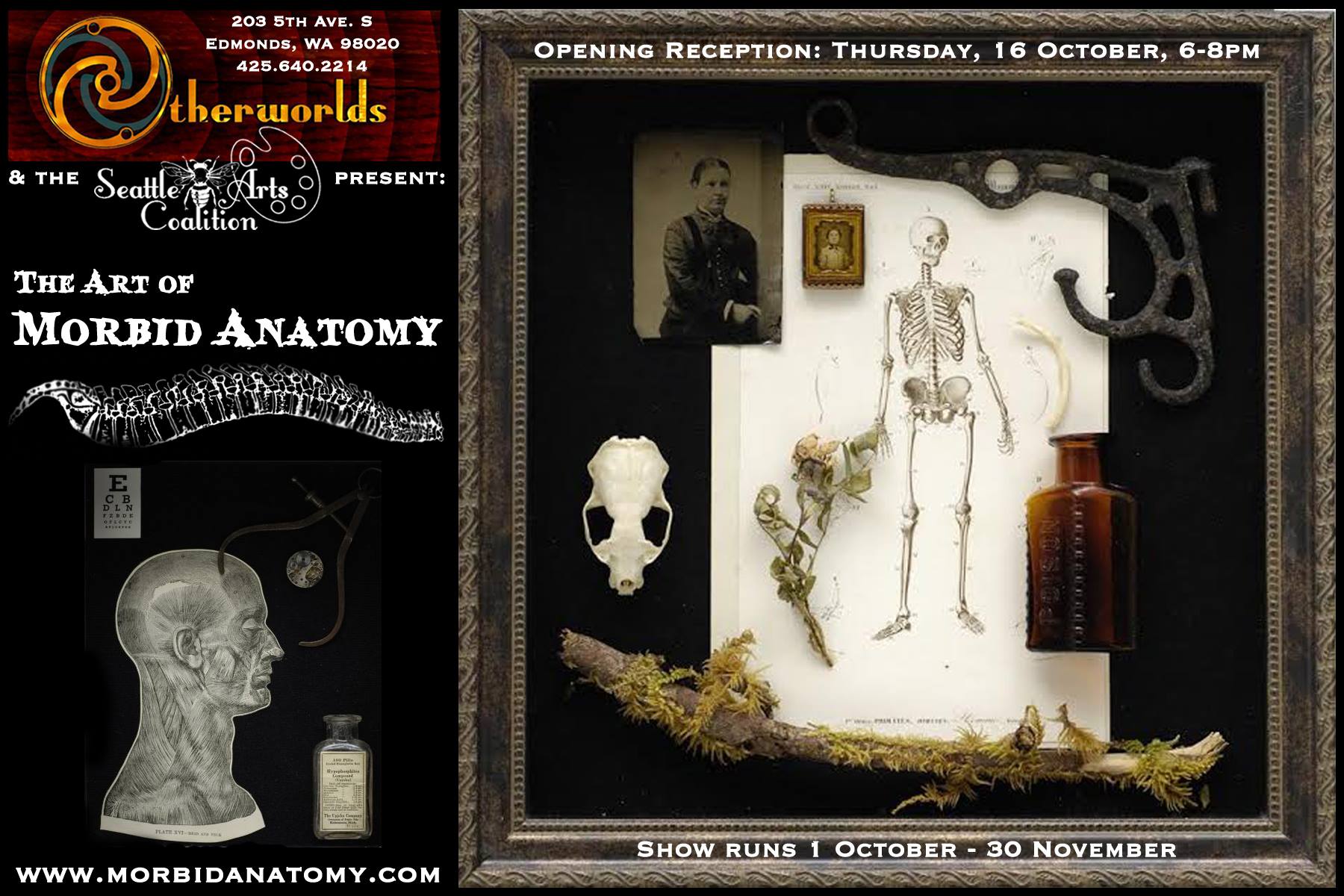 Morbid Anatomy has several pieces on display at the enchanting gallery of the Nautilus Studio in Georgetown. The proprietors, Yvette and Jethaniel, graciously welcome you to Art Attack every second Saturday of the month. For more info, please visit www.thenautilusstudio.com. 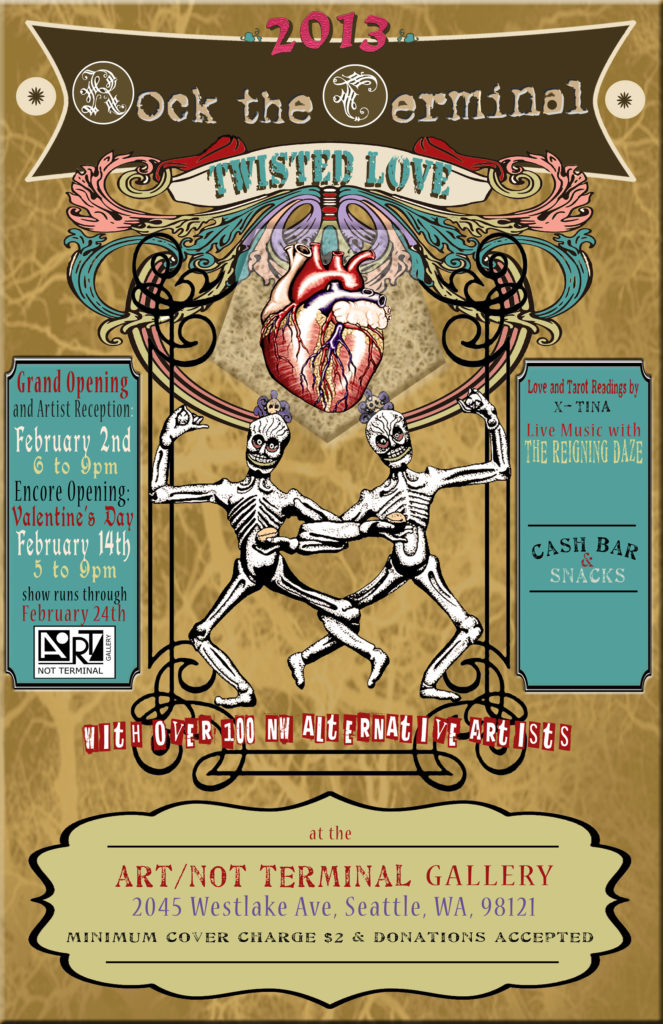 Morbid Anatomy will be one of over a hundred NW Alternative Artists featured at ROCK THE TERMINAL IV “Twisted Love” at Art//Not Terminal, Seattle! Join us for the Grand Opening and Artist Reception on Sat, Feb 2nd from 6pm – 9pm. Info at: 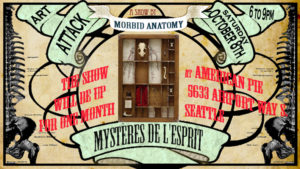 Morbid Anatomy is back for the entire month of October with a new show ‘Myst俊es de l’Esprit’ at American Pie in Georgetown! Stop in on Sat, October 8th for Georgetown’s monthly ART ATTACK and sink your teeth in…

Next Morbid Anatomy Show will be during the month of August at Two Birds Tattoo in Greenwood, Seattle! Join us from 6-9pm for an Artist Reception on Friday, August 13th as part of this month’s Greenwood ArtWalk.

Full details and info on www.twobirdstatto.com.

Morbid Anatomy artwork will be featured at Ghost Gallery all throughout the month of October, as part of the group showing ‘Anatomy Lessons’. Come meet Anita at the Artist Reception on Thursday, October 14th from 5-8pm and again on Saturday, October 30th for the costumed Halloween Party. Ghost Gallery is located in Capitol Hill, Seattle on 504 E. Denny Way.
www.ghostgallery.org 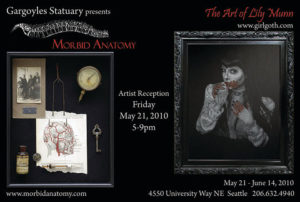 Join Morbid Anatomy and Lily Munn for an evening of Art and Refreshments at Gargoyles Statuary on Friday, May 21st from 5-9pm.

Morbid Anatomy will be displaying piece after piece at Calamity Jane’s Restaurant and Bar in Seattle’s historic Georgetown neighborhood in April 2010. Join us for the Artist Reception and party between 6-9pm on Saturday, April 24th!

Morbid Anatomy continues the series of shadow boxes based on the ancient philosophy of Alchemy. Exploring the stage of Albedo, Anita will present thematic shadow boxes for one night only on Thursday, March 4th. Don’t miss out on this very special show!

Morbid Anatomy will be speaking at Templecon on Sunday, Feb 7th as part of the Neo-Victorian Art Symposium panel and vending both shadow boxes and greeting cards the entire weekend.

Next Morbid Anatomy art show is at Retail Therapy on Capitol Hill. Art work goes up on Sunday, January 10th and the Reception is on Thursday, January 14th from 6pm to 8pm as part of the Capitol Hill Art Walk. Join us for a glass of wine and say hello!

Morbid Anatomy returns to Mourning Market for a very special ‘Haunted Holidays’ event on Sunday, Dec 13th from 12pm – 6pm. Join a venue-full of talent as we gear up for a most festive season.

In 1895, a scientist stumbles upon a light that illuminates what has never been seen, the inside of the human body healthy and whole. In flash, the X-ray is born. Lead by Edison through the fairs, festivals, and drawing rooms of the America of the 1890’s, Bone Portraits is a wild ride of old-time Vaudeville, Victorian romance, and Gothic horror, taking us back to this moment of discovery. Back to a time when scientific discoveries began to revolutionize society at a blistering pace, when the world split open like an atom and nothing could ever be seen the same way again.

Anita Arora returns to Victrola in October to launch a new series of shadow boxes based on the ancient philosophy of Alchemy. Focusing her work in a new direction, Anita takes us on a journey through the first of the three stages of the Great Alchemical Work..the stage known as Nigredo.

In practice, Nigredo is the alchemical process of transmutation of a base substance into a higher one. Nigredo is also the phase of conscious decomposition necessary to suffer in order to destroy that within ourselves that is no longer who we are. With images and objects, Anita presents symbolism of this passage and interpretation of her personal experiences in Nigredo.

Anita will be at Victrola for the Artist Reception on Friday, October 9th between 6pm – 8pm.

Here are a few images from the recent Pharmakon show at April Artwalk:

Scream, month of April
New and old works will be on display throughout April at Scream Barbershop on Capitol Hill:
819 E Thomas St, Seattle 98102

Morbid Anatomy introduces new pieces at Uncle Elizabeth’s as part of the Capitol Hill ArtWalk on February 10 and March 10.

January @ Cafe Dharwin
14-20 pieces will be hanging at Cafe Dharwin during the month of January 2009. This is a smaller but very well-presented venue on 10th Avenue, north of Capitol Hill as you head to Roanoke. 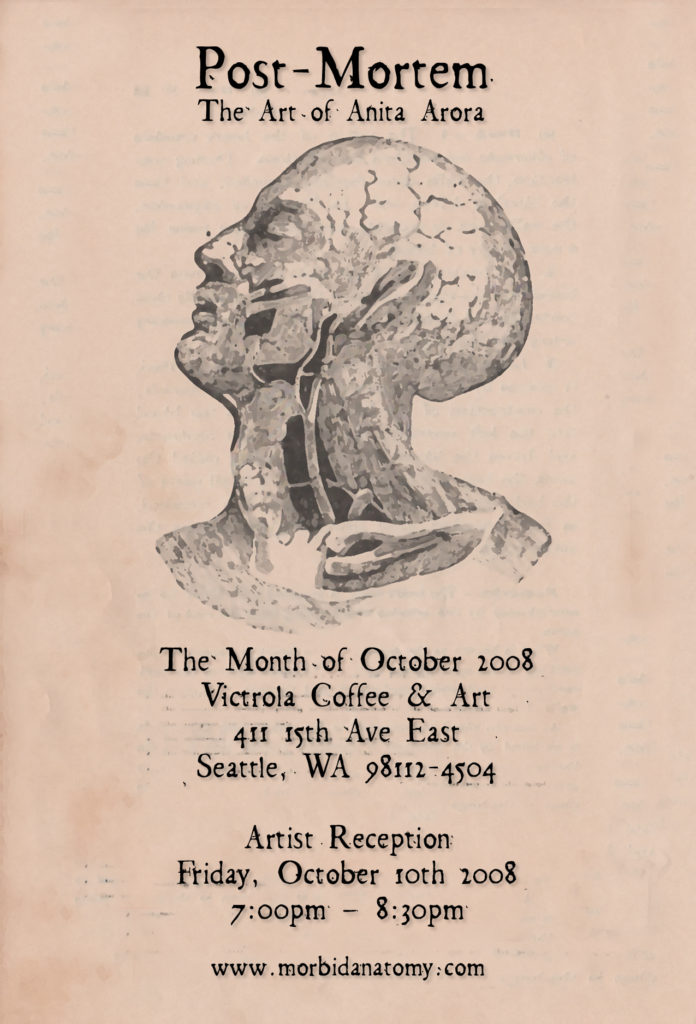 Morbid Anatomy showing throughout the month of October.

“Known for her examination of the contrast and the inherent co-existence of beauty against what often is regarding as the macabre, artist Anita Arora’s new show ‘Post-Mortem’ reflects human nature and the parallels that manifest in not only the historic discoveries of anatomy but the complexities that make us who we are. In her new show ‘Post-Mortem’, Anita displays her latest works.”

Photos from the October 10, 2008 opening reception at Victrola.